ifandany
knitting it up in a big way

I made an octopus! Jill was working on one when we met for coffee. I’d forgotten my own knitting, so I hopped in on the tentacle production and immediately admired the sculptural cleverness of this pattern.

Look at that well designed bulbous head! Look at those wiggly little tentacles! Admittedly, there’s some pipe cleaners for a little extra wiggle assistance, but the short rows that shape the tentacles create their own bias, which is kind of brilliant!

Yarn: Ewetopia Pashm DK in storm sky (so soft and squishy and dreamy!)

Madelinetosh unicorn tail in hot hot hot pink (not my usual thing but such a fun accent color!)

Others: I used some stuffing for fluffiness, and pipe cleaners for wiggliness.

I would absolutely knit this again. In fact, writing this blogpost has made me want to knit one immediately.

After my whole daydreamed redesign of our bedroom, we moved! I’d already started implementing little things, and documenting the room ‘Before’ the change when we found out that our landlord was selling. Suddenly, I didn’t feel quite so motivated to make changes to the bedroom. So… alack! Twas all for naught! 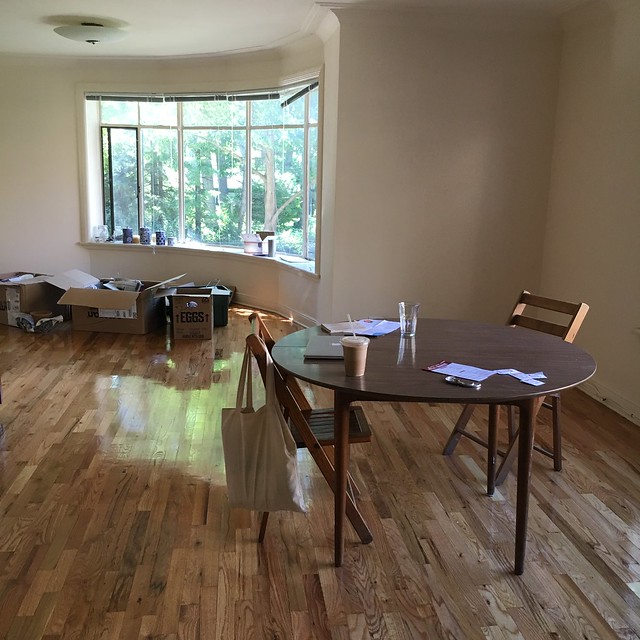 We took one look at this place, with it’s huge beautiful windows, abundance of natural light, deco detailing, and decided yes, this was our new apartment.

We moved in September 1, and I’ve been busy unpacking! 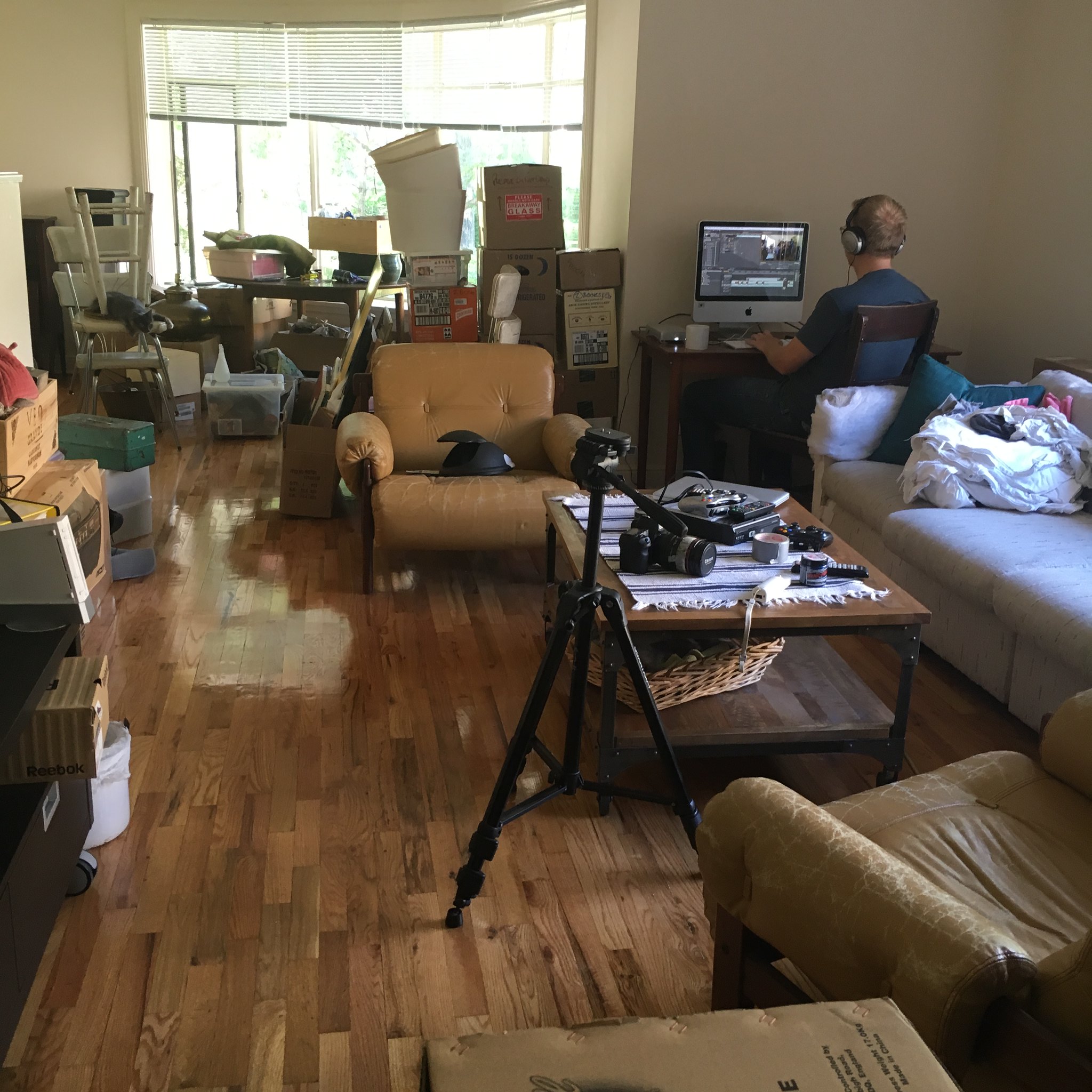 I kind of hate pictures with so many unpacked boxes in them, but hey, it’s totally the truth. I went around taking pictures of a few areas in the mean time, though: 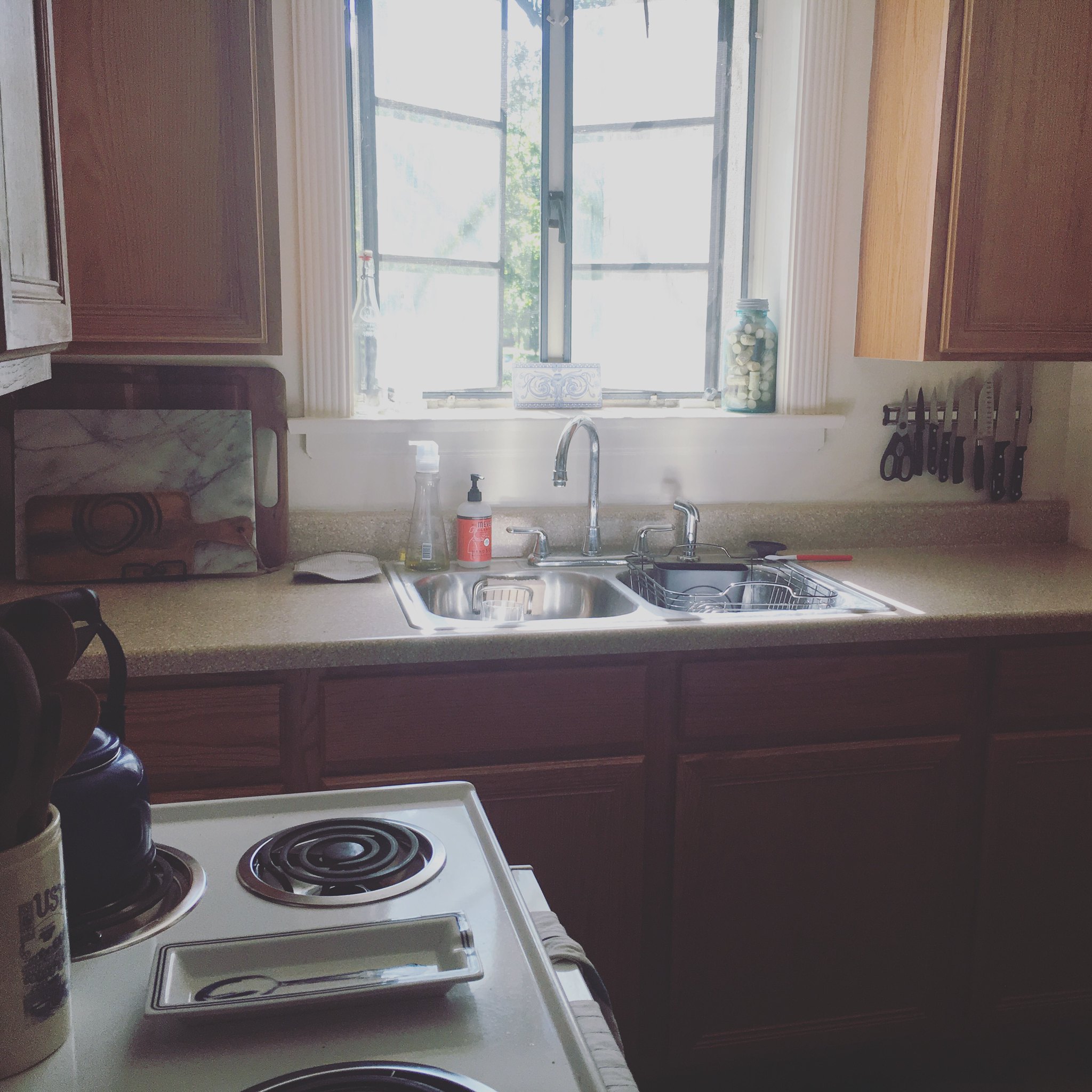 Unpacking the kitchen was my first priority. Gotta be able to eat and drink! Putting up my magnetic knife rack was a big one, as it turned the room from A kitchen to MY kitchen. This is by far the smallest room in the place (I think it’s possible it’s smaller than the bathroom, honestly), so I was worried about organizing it. 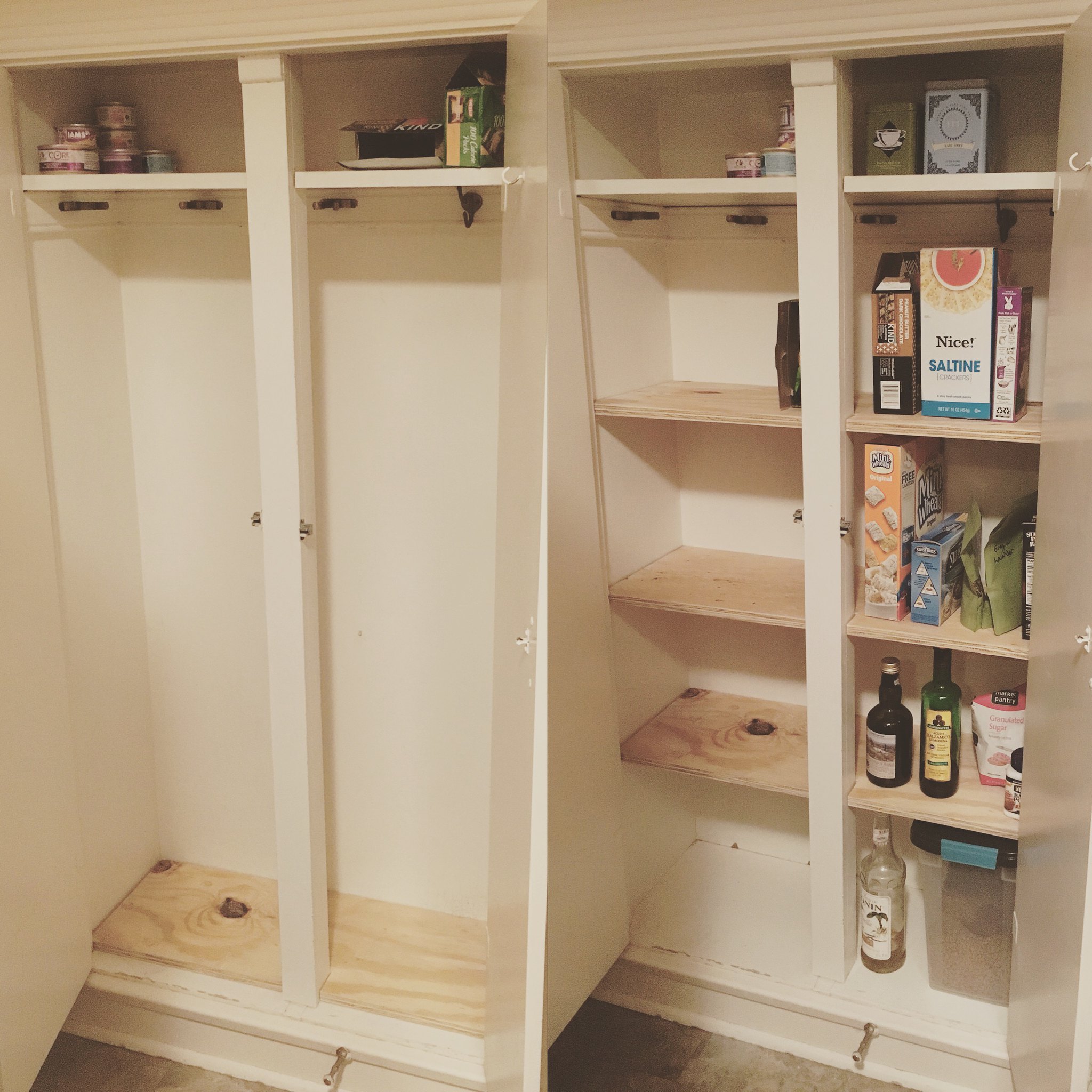 We put some shelves in this shallow closet to make it a pantry, which freed up all of the cabinets for china and cookware. 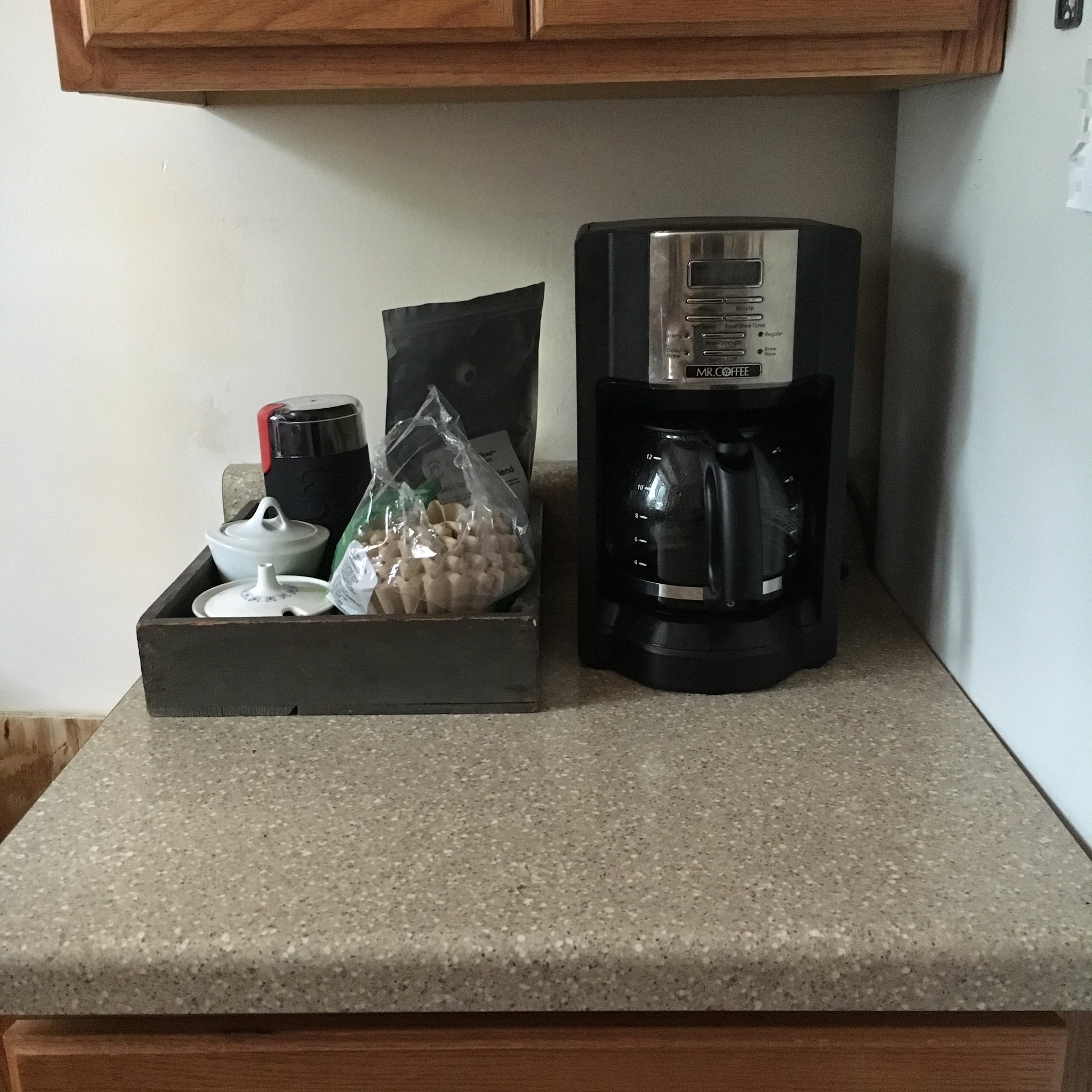 There’s limited counter space, so I’m being very picky about what is allowed to take up that space. Coffee is a must, though! The microwave is hidden away in a closet right now. We’ll see if it actually gets any use in there. 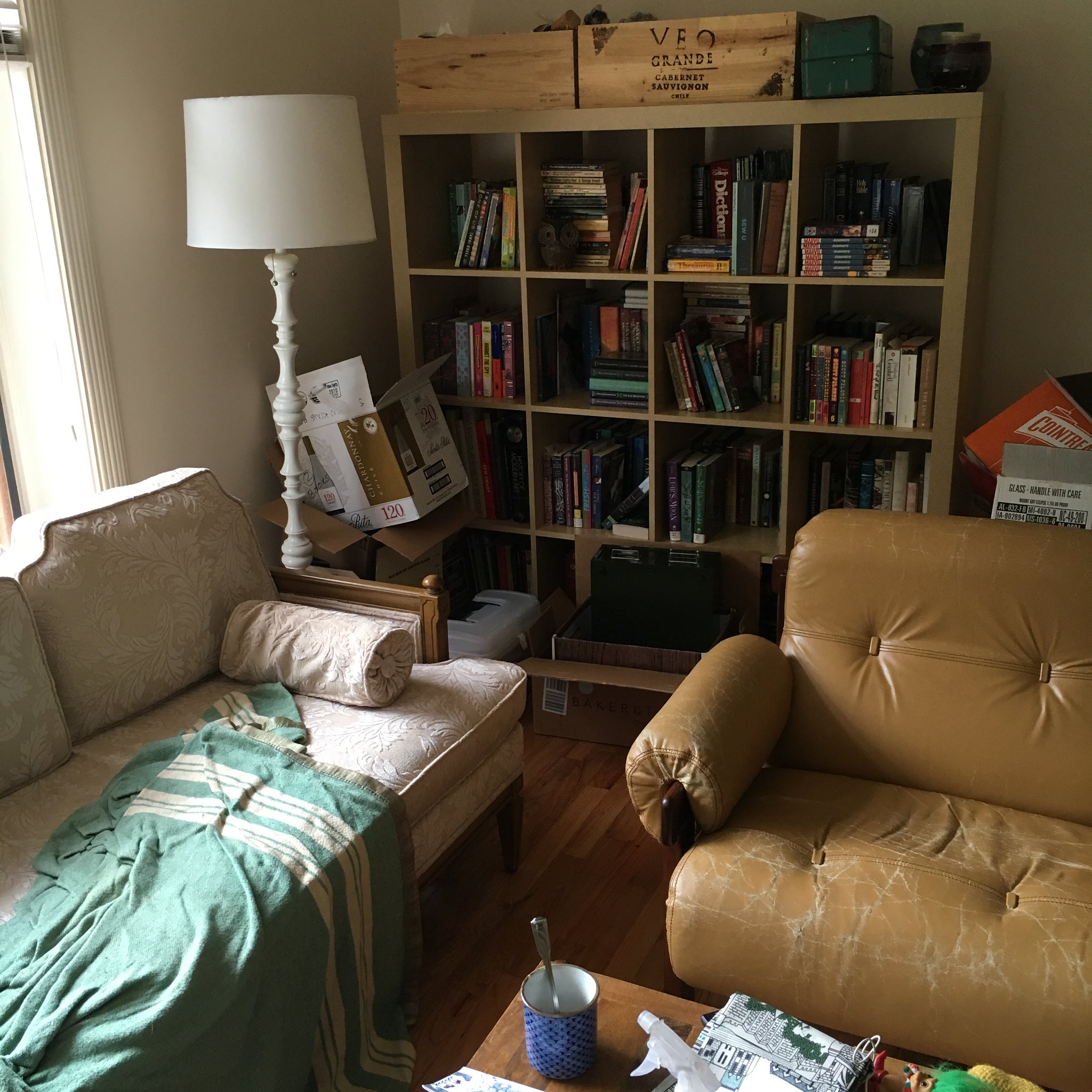 It felt sooo good to unpack our books. This made it more of a home than unpacking the kitchen or my clothes. Also, as a note, our local Binny’s was really nice about letting us grab a handful of boxes anytime we asked, and wine/beer boxes are perfect for books! You can’t pack them too full, because they are fairly small, so they never get too heavy, and they are traditionally a little more structurally sound because they’re made for heavy product! 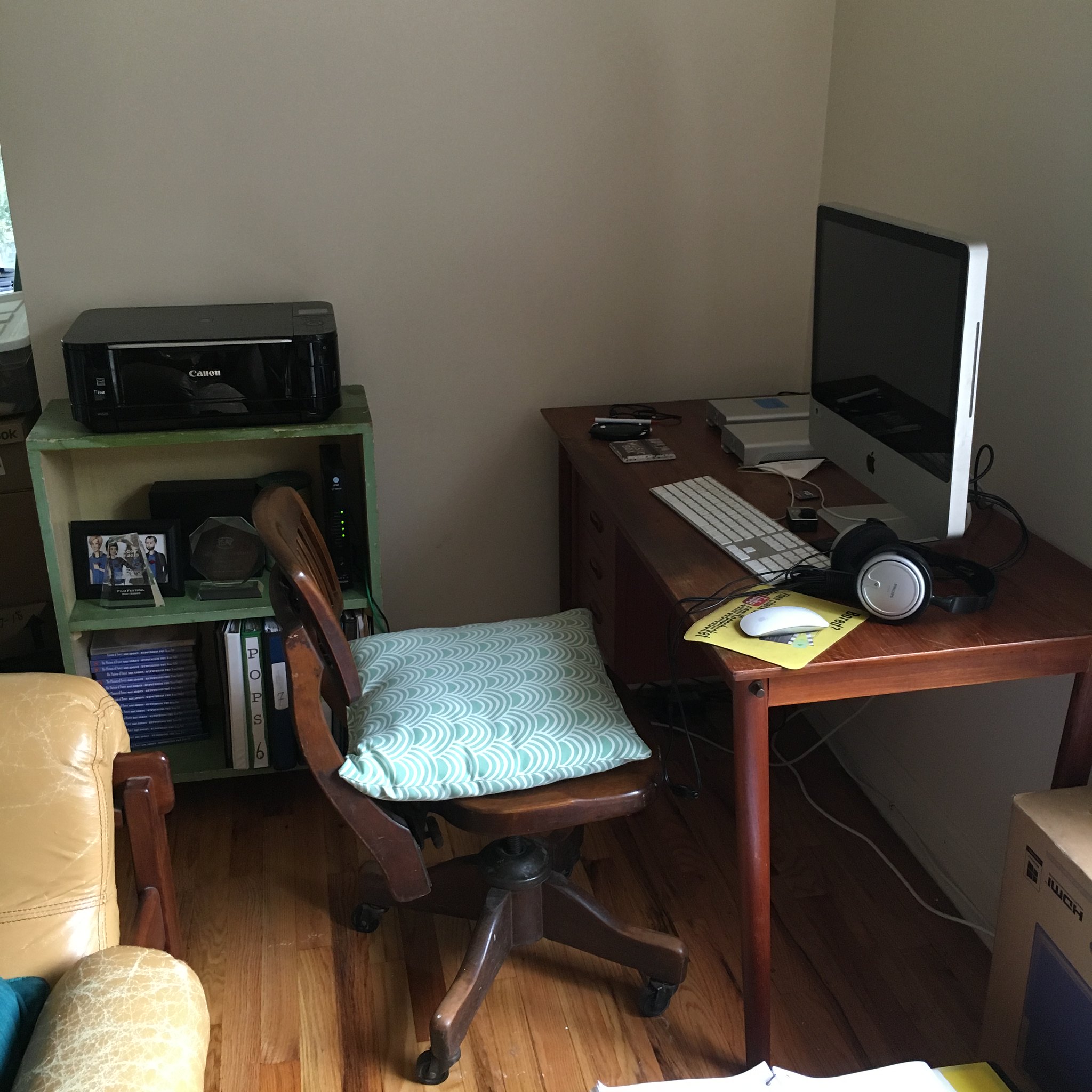 If you have eagle eyes, you might note that the desk is already on a different wall than it was above. I expect things will change as we actually live in and use the space. I’m trying not to hang anything on the walls until I feel like the furniture is a little more finalized… 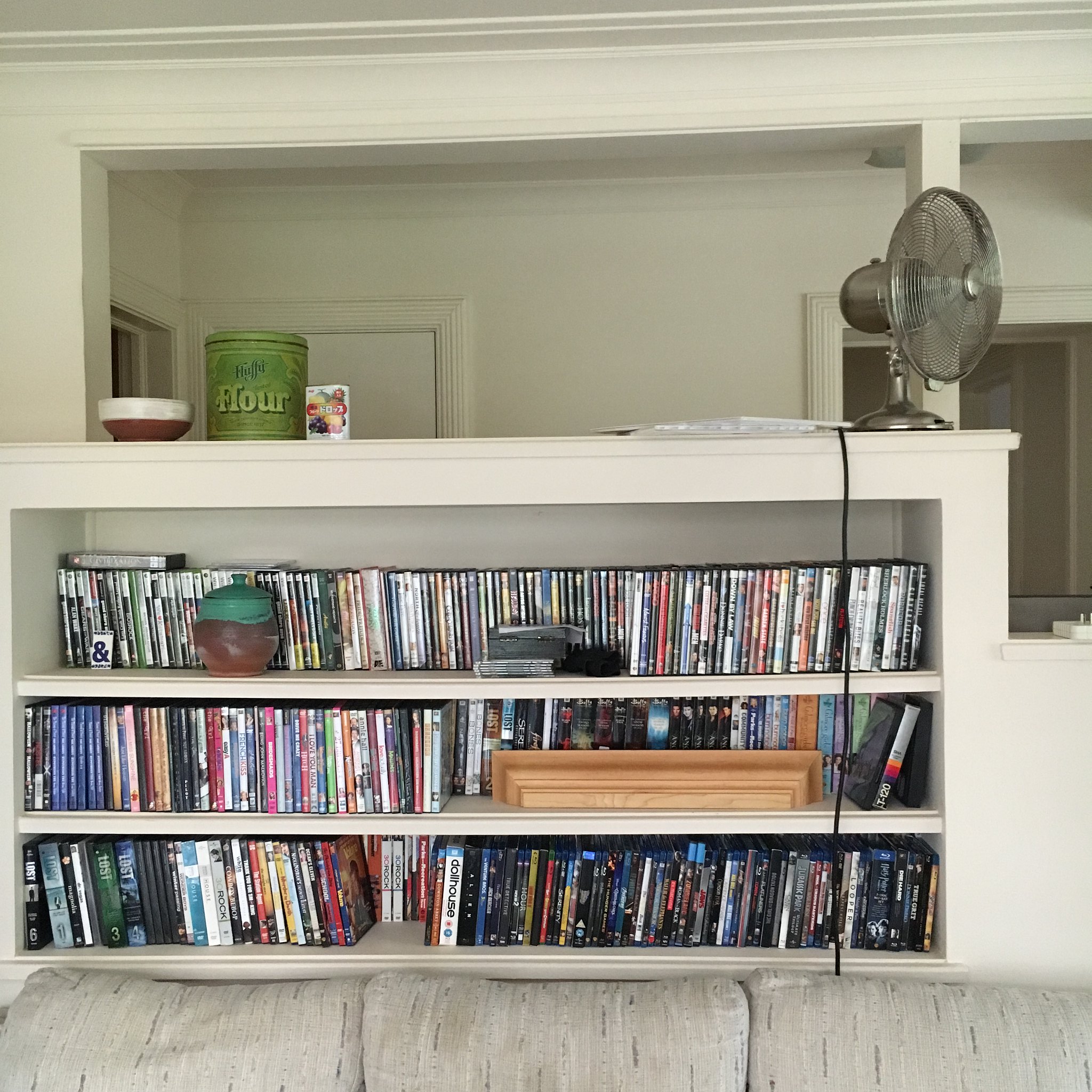 I’ll probably be organizing things a little more visually, ultimately, but I’m trying to prioritize unpacking right now. This is our couch without the white slipcover, by the way. I should say former couch, as it has moved on to a new home, and you can peek at our new couch here: 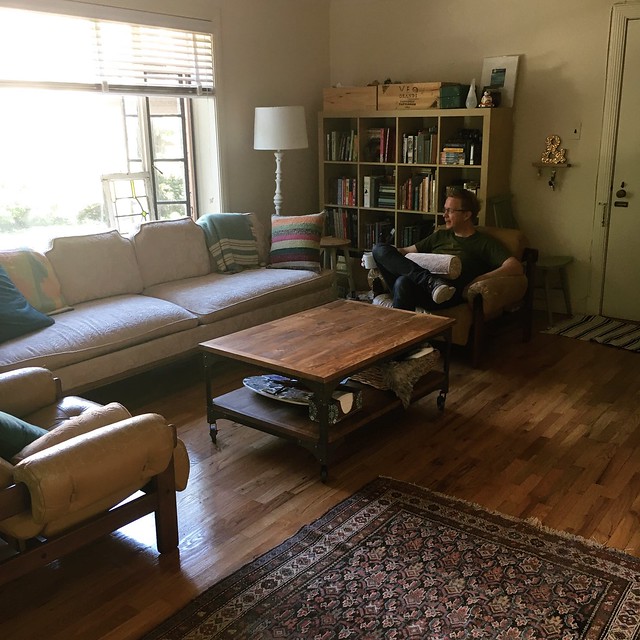 Exciting to be in a new place! With full height ceilings! And lots of natural light! And more space!

Kids who are cooler than me

Right, so let’s be honest, here, I don’t set the standard very high for coolness. Jake and I are as likely to be going to the gym and watching a movie at home on a Friday night as anything else. But I kind of love kid fashion, and every now and again I see a kid who is so damn cool, I just want to be them when I grow up. Kids worth taking fashion notes from:

Look at that awesome old gold/dark mustard linen shirt! I’d feel so cool rocking that. Plus that flower crown is amazing.

Accessorizing like mad with a slouchy hat and a casual lollipop, showing us all what it truly looks like to win at life, this girl is my hero.

Looking rustic and hip with her plaid scarf, and knee socks peeping out over her boots. Don’t you want to go take a walk along the lake and let your hair get casually blown out it’s ponytail?

Right, this outfit isn’t actually ON a kid, but it’s obviously meant for one. But I WISH it was meant for me! Blue polka dot skirt, mustard bag, tweedy jacket, and grey mary-janes, be mine!

And these girls… are chic-er as tweens than I can ever hope to be.

So, anyways. Those are some sartorial inspirations to me.

Do you remember when I fell in love with woollenflower’s cow parsley cowl? Well, I wasn’t joking. I liked it so much that I decided to recreate it for myself. I mapped it out and made a delicate hat with the cow parsley pattern.

As usual, the biggest challenge was how to decrease in the pattern. I ended up with this rather lovely six pointed star at the crown.

I went for an extra long brim to maximize the flexibility, and also the warmth. The yarn is quite fine, so even though the base is alpaca, the breeze could get through quite easily. Hopefully making the brim foldable to double it up would help with some of that.

Pattern: I used the sockhead slouch hat pattern as a base, and the colorwork was inspired by woolenflower’s beautiful cowl.

Winner’s Kiss– Fell in love with this series, Marie Rutkoski’s writing, Kestrel and Arin! I started reading it in February, thinking that the third one was coming out March 1st. I finished the second one completely exhilarated and desperately wanting the third one, congratulating myself on timing that out so well… Only to find out that the release date is actually at the end of March, not the beginning. *sigh* I’m a sucker for this kind of thing: you can play Bite & Sting online! It’s a game played in the books that seems kind of… mah jong meets poker to me? Expansive world building is the best!

The work of Natalie Stopka: Natalie is a bookbinder, natural dyer, and marbler (or suminagashi, if you feel like getting fancy about it). I LOVE her work. She makes beautiful books, and ribbons and marbled silk scarves. She has a heavy emphasis on natural dyes, some of which she grows herself. Her bound books are amazingly beautiful. The one pictured above was a copy of The Plant-Lore and Garden-Craft of Shakespeare by Henry Ellacombe (doesn’t he sound like a Jane Austen character?) whose binding was falling apart. So she took it apart, resewed the binding, and created a new cover: “I laid out the cover in formal symmetry as a nod to the embroidered books gaining popularity during Shakespeare’s time, as well as Elizabethan era garden design with its symmetric ‘thick-pleached alleys.’ Each quadrant depicts a plant prominent in Shakespeare’s writing (and thus Ellacombe’s) of particular symbolic meaning: honeysuckle, calendula, burdock, and rose, as well as a pansy on the spine. The linen book cloth as well as embroidery threads and headbanding silk were each naturally dyed with plants foraged in upstate New York. These include oak and birch leaves, apple and cherry barks, and willow fronds.”

Have you ever heard of anything so lovely as that? Her work makes me swoony.

I was wandering around Madewell the other day wishing I was a millionaire so I could just buy one of everything (okay just half, but still). They have this lovely drapey blouse in several different fabrics that I loved. It looks so breezy and comfortable and summery. It strikes me that I can probably raid my grandpa’s closet for really nicely worn in button downs, chop off the sleeves at about 6″, and roll them up for a similar look!

I’ve been contemplating and working up to this purchase for a good six months, and I had some leftover money on a Sephora gift card, so I finally took the plunge and bought myself a Naked 2 palette by Urban Decay! The result is that I’ve been excited enough to actually put on makeup before leaving the house recently. I doubt that trend will last very long, but I’m really chuffed to have it. It’s such a great line up of neutrals, I don’t think I’ll need to buy eyeshadow again for years.

I can’t pinpoint exactly when it happened, but somewhere around the same time that I started dreaming about making changes to the bedroom, I also became mildly obsessed with plants as a part of decorating. You can definitely see the impact in my home oriented pinboard. I’m slowly buying plants and working to make them thrive. My donkey tail succulent and jade plants are doing just fine, and I finally found a string of pearls, but it isn’t quite as happy… I’m hoping it’s just adjusting? Cross your fingers for me!

Unrelated, and deserving of its own blogpost, I’m doing a remix! If you want to follow along in real time, check out my instagram.

a year of us in pictures of us

I usually publish this post around our anniversary in late September, but I’m extra behind in blogging. I’m only going to bother catching up with the ones I want to, and this is among them. I figure it being Valentine’s weekend, this is an appropriate time to post it. 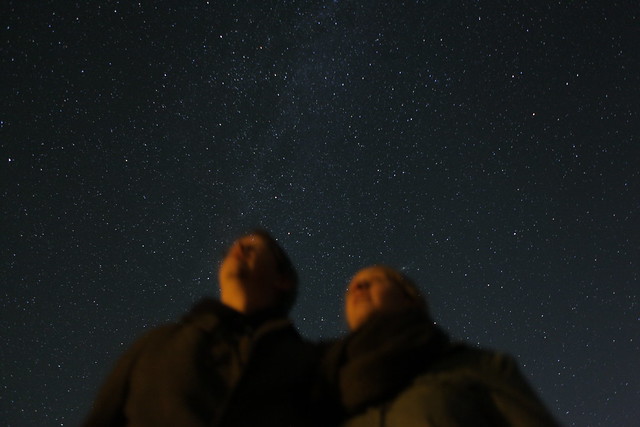 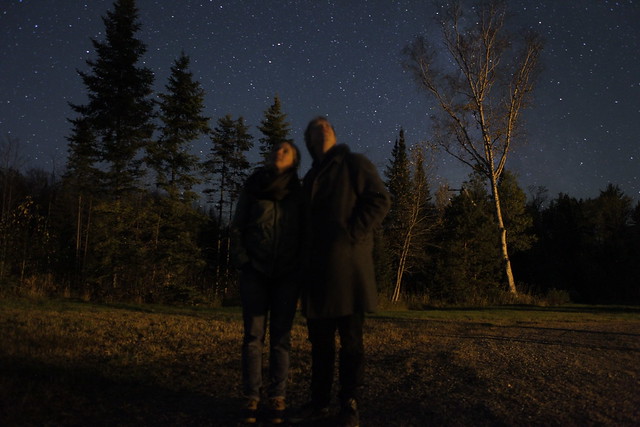 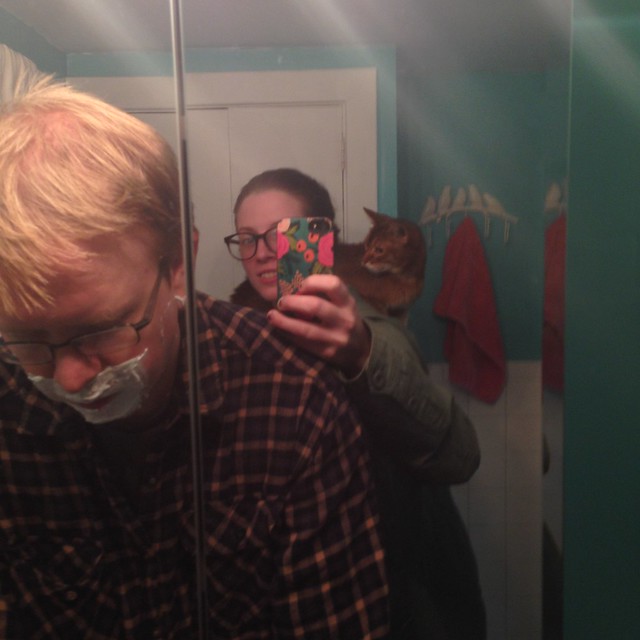 A family photo (miss that kitty). 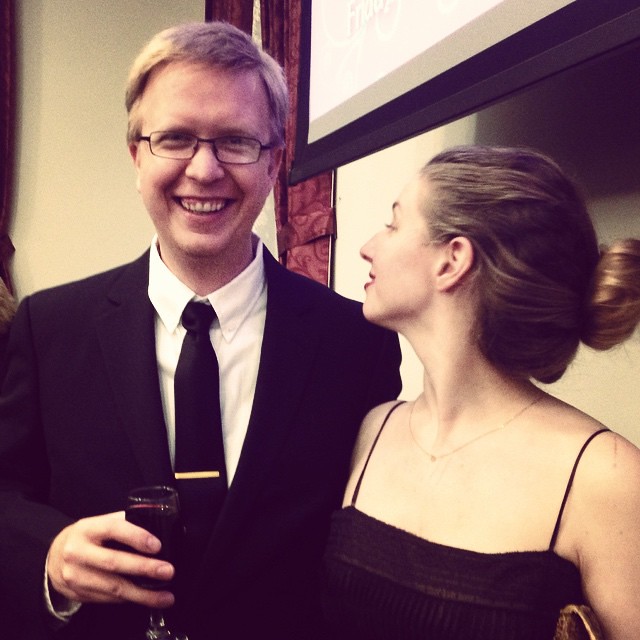 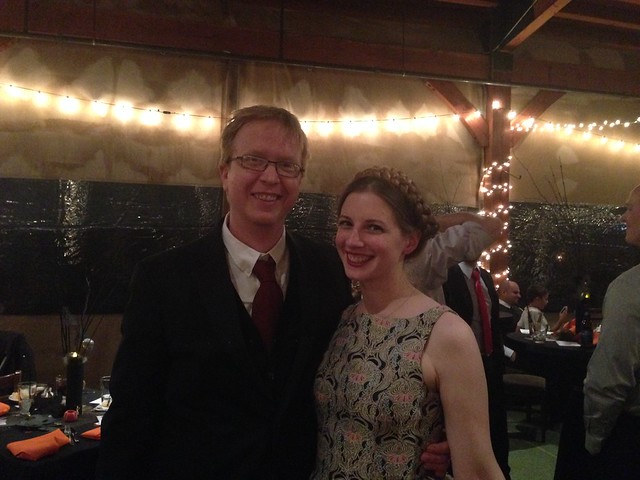 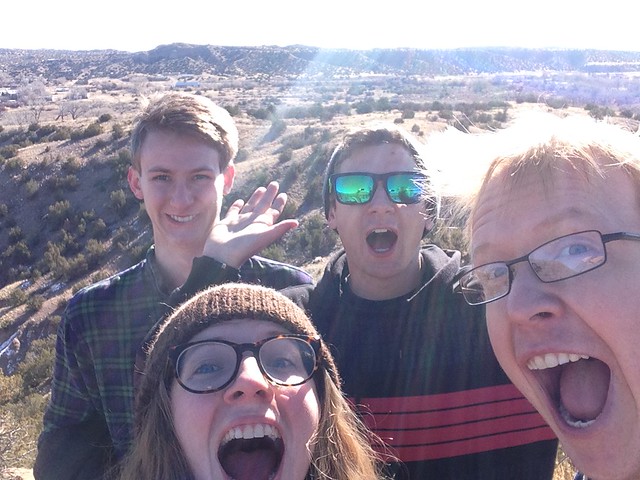 With my cousins in New Mexico. 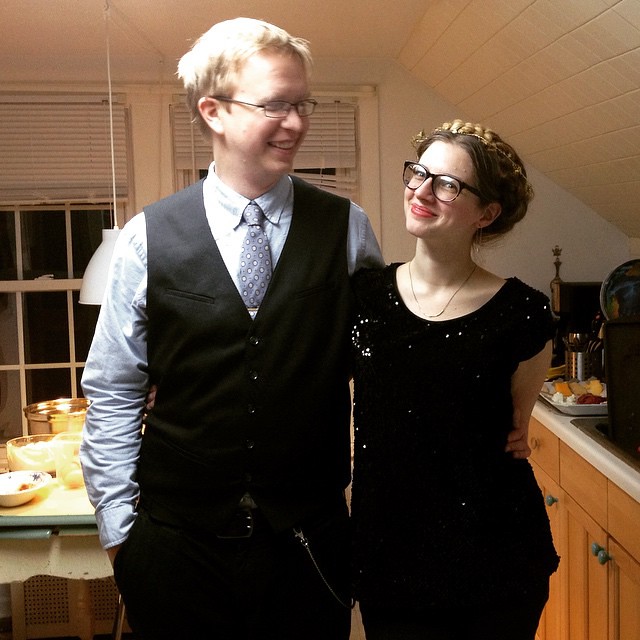 In a dirty kitchen for New Years. END_OF_DOCUMENT_TOKEN_TO_BE_REPLACED

Full moon shirt: I bought this for myself recently, and I’ve been wearing it as much as I can get away with. It’s in the laundry right now, and I can’t wait to be reunited with it.

Their Fractured Light by Amie Kaufman & Meagan Spooner- Finished this recently. It’s the conclusion to the Starbound trilogy. The authors did a visit to a nearby bookstore, so I went out to meet them, and they were fun, and warm, and witty, and I’m glad I did.

Dope-watched this movie recently, and I LOVED it. In tone, this feels like Risky Business, or Ferris Bueller’s Day Off, but representing the not-Beverly-Hills version of LA, as opposed to white kids running around their affluent suburbs.

Bookmaking- One of the classes I’m taking this semester is bookmaking, and I’m looooving it. Getting inspired to do fancy things via pinterest, as always!

Planning the bedroom re-do has me questing for beautiful hanging planters, like this lovely on etsy.

What have you been doing/seeing/reading/wanting to buy? Anything I’d like?